1.What is SSAW steel pipe？ 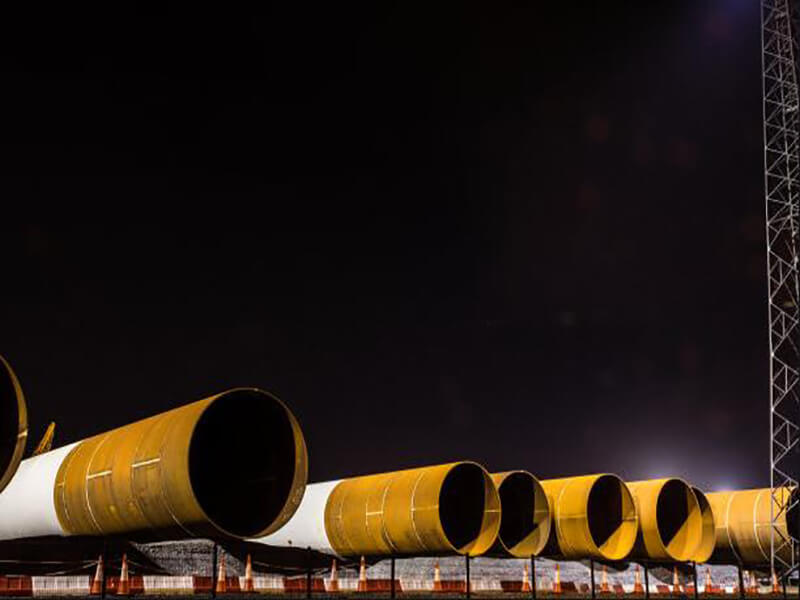 SSAW steel pipe is made by rolling low-carbon carbon structural steel or low-alloy structural steel strip at a certain spiral angle (called forming angle) into a tube blank, and then welding the pipe seam together. It can be made with a narrower strip Steel produces large-diameter steel pipes. Its specifications are expressed by outer diameter * wall thickness, and the welded pipe shall be ensured that the hydraulic test, the tensile strength, and cold bending performance of the weld meet the requirements.

As the bearing pressure of pipelines is increasing day by day, the conditions of use are becoming more and more demanding, and the service life of pipelines should be extended as much as possible, so the main development directions of SSAW steel pipes are: (1) Produce large-diameter thick-walled pipes to improve pressure resistance; (2) Design and produce steel pipes with new structures, such as double-layer SSAW steel pipes, that is, double-layer pipes are welded by strip steel with half the thickness of the pipe wall, which not only has higher strength than single-layer pipes of the same thickness but also does not cause brittle failure; (3) Develop new steel grades, improve the level of smelting technology, and widely adopt controlled rolling and post-rolling heat treatment processes to continuously improve the strength and toughness of the pipe body and welding performance; (4)Vigorously develop coated pipes, such as coating the inner wall of the pipe with an anti-corrosion layer, not only can extend the service life, but also improve the smoothness of the inner wall, reduce fluid friction resistance, reduce wax and dirt, reduce the number of pigs, and reduce maintenance cost.

3.Mainly use of SSAW steel pipe

It is widely used in civil engineering construction such as houses, bridges and roads. Main production areas: Spiral pipe manufacturers are mainly distributed in North China and Northeast China. North China areas such as Shougang, Tangshan Iron and Steel, Xuanshan Iron and Steel, Chenggang, etc., and Northeast areas such as Xilin, Beitai, Fugang, etc., these two regions account for about thread More than 50% of the total steel output. SSAW steel pipes are widely used in natural gas, petroleum, chemical, electricity, heat, water supply and drainage, steam heating, penstocks for hydropower stations, thermal power generation, water sources and other long-distance transmission pipelines and engineering fields such as piling, dredging, bridges, and steel structures. SSAW steel pipes of good quality have thin and low transverse ribs, and often appear dissatisfied. The reason is that in order to achieve large negative tolerances, the reduction of the first few passes of the finished product is too large, the iron-type is too small, and the hole type is not full.

(1) The same width strip can be used to produce pipes with a variety of outer diameters; (2) The pipe has good straightness and precise dimensions. The inner and outer spiral welds increase the rigidity of the pipe body, so there is no need for sizing and straightening after welding. Process; (3) It is easy to realize mechanization, automation and continuous production; (4) Compared with other equipment of similar scale, it has a small size, less space and investment, and faster construction; (5) Compared with the same size longitudinal welded pipe , The welding seam per unit length of the pipe is longer, so the productivity is lower.

Because the individual quality of SSAW steel pipe is relatively large, it must be stacked outdoors, but it is unavoidable to be exposed to the sun and rain, so the problem of rust has always plagued the storage time and conditions of SSAW steel pipe. Therefore, it is necessary for us to provide a comprehensive answer on the anti-rust knowledge of SSAW steel pipes. Tools such as wire brushes are mainly used to polish the surface of steel. The cleaning and preheating of SSAW steel pipes can remove loose or warped oxide scale, rust, welding slag, etc. The rust removal of hand tools can reach Sa2 level, and the rust removal of power tools can reach Sa3 level. If the steel surface is attached with a firm iron oxide scale, the tool rust removal effect is not ideal, and the anchor pattern depth required for anti-corrosion construction cannot be reached. Pickling uses solvents and emulsions to clean the surface of welded steel pipes (welded pipes) for low-pressure fluid transportation to remove oil, grease, dust, lubricants and similar organic matter, but it cannot remove rust, oxide scale, welding flux, etc. on the surface of steel. Therefore, it is only used as an auxiliary means in anti-corrosion production. Generally, two methods of chemical and electrolysis are used for pickling. Pipeline anticorrosion only uses chemical pickling, which can remove oxide scale, rust, and old coatings. Sometimes it can be used as a reprocessing after sandblasting and rust removal. Although chemical cleaning can make the surface reach a certain degree of cleanliness and roughness, its anchor pattern is shallow, and it is easy to cause pollution to the stacking environment of SSAW steel pipes. Reasonable use of methods to clean up rusty pipe fittings ensures that the pipe fittings will serve the production for a long time and create more production benefits.